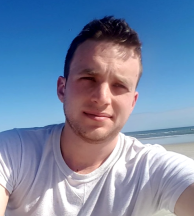 Adam Byko is an MFA candidate and Provost Fellow with the University of Central Florida. Adam grew up in the historic district of Harmony, Pennsylvania — a town founded by a religious cult that died out because they believed celibacy was necessary to go to heaven. Adam is not entirely certain that he is a real person and not a character in a weakly written literary novel.

In the weeks before he was born, a truck tire bounded across five lanes of stopped interstate traffic to crush his father’s car, and lightning charred all the electronics in his parents’ house. In elementary school, the diaper factory behind his father’s house shut down. In high school, a coffin factory took its place. When Adam was confirmed into the Catholic Church, the pope died while he was still at the ceremony.

Now, Adam mostly writes to try and produce less hacky material than his life has so far. He lives in Lake Mary, Florida, with his semi-adopted stray cat named Oliver.